According to archaeologists, about one hundred inhabitants lived in the south of Quintana Roo twelve centuries ago, that is, three times as many as there are now. The region was then one of the most powerful in the Mayan world, and vestiges of that period confirm that its cities were extensive and had sophisticated ceremonial centers and large residential areas for the ruling groups; In addition, they were equipped with extensive infrastructure works such as roads, canals, and artificial water collection systems and of course, their culture developed a majestic art.

This route is formed by three archaeological zones very close to each other, Kohunlich, Dzibanché and Kinichná, which are those that are open to the public and that make up a representative and formidable sample of the greatness of the Classic Maya of this part of Mexico. Impossible to miss it.

The sites that make up this route are located west of the southern zone of the state of Quintana Roo. The access road is federal highway 186 (towards Escárcega, Campeche), from where the branches that lead to them leave. These branches start almost from the same point, about 55 kilometers from Chetumal, which again works very well as a base of operations to reach the area. From Kohunlich to Kinichna, the extreme points of this route, there are no more than 33 kilometers. The roads here are in good condition and have signage. 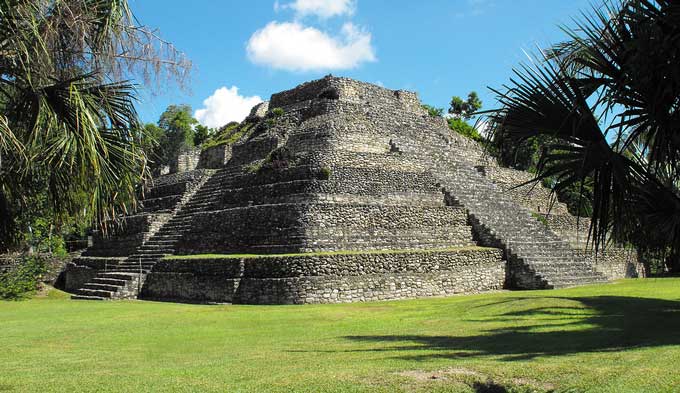 Just 8 kilometers north of Buenavista (and 37 of Bacalar) starts on the left (northwest) Federal Highway 293 bound for Chunhuhub and Merida. You have to turn there to get another 8 kilometers later to this archaeological zone.

Like Kohunlich and Dzibanche, Chacchoben was born as a small village around 200 BC. Throughout the first millennium of the Christian era, an important construction boom took place, which decayed towards the year 700. A couple of centuries later the city was abandoned, and then partially repopulated in the years close to the Conquest. The remains of this city cover about 70 hectares. The first building that the visitor sees is Temple 24, a tall and very impressive pyramid that reveals by its architectural details a probable kinship with other Mayan cities of Petén. Follow Plaza B, whose sides are some structures not completely dismantled. Then appear several elongated platforms on which there should have been residential areas for the dominant groups of the city. At the southern end of the area open to the public rises the Great Basamento, which is indeed a very high artificial platform on which several pyramids were built, including the magnificent Temple 1.

The exploration of this site began in 1994. Having no prior reference to the site, it was decided to give it the name of the ejido on whose land it is located. In September of 2002, the place was open to the public.

Although perhaps it was not more than a subsidiary center of Dzibanché, against which it is much smaller, the researchers have given it a proper name that means "House of the Sun". Its main construction is the Acropolis, which is a wide pyramid of three levels, with complete symmetry. It is climbed by a wide staircase that leads, on the first level, to a couple of temples located laterally. This sequence is repeated on the second level, from which a stairway rises again, this time narrower, leading to the third and final level, crowned by a single temple with two vaulted bays. This temple conserves in its exterior remains of friezes made with stucco that show solar motifs. That's where important offerings with jade objects were found.

The place is also spectacular. The trees that cover it contribute to accentuate this effect. It is located 2 kilometers north of the same access booth of Dzibanché.

This site, whose name in Yucatan Maya means "between ramones", is located 7 kilometers north of Calderitas. This city arose and reached its apogee during the Classic period of the Mayan culture, between 300 and 600 AD. Later decayed, but remained inhabited until the arrival of the Spanish conquerors.

Its location less than 1000 meters from the Chetumal Bay has led some researchers to think that perhaps this was the great city of Chactemal cited in historical sources. Most of the buildings that can be seen today in this area were erected between the 4th and 6th centuries AD.

They are grouped mainly around two squares called Las Abejas and Columns. In the first, there is a central altar and several pyramidal foundations on the sides, some of which were residential. There the building IV preserves on its top the remains of what could have been a sacred labyrinth. In the second square stand a steep pyramid and the remains of a building that seems to have had palace functions.

Several of these constructions had as decoration large masks of polychrome stucco that today have disappeared. Towards the east of the zone, the surprising vestiges of a Christian chapel on some Mayan ruins are located. It is believed that such a chapel was built by the conqueror Alonso de Ávila in 1531, although some experts think that this chapel is rather from the end of the 16th century or the beginning of the 17th. Anyway, this combination of Mayan and Spanish archaeological remains have become the emblematic image of Oxtankah.

The visitor will find in this area a small museum with some reproductions of ceramic pieces found in this place, as well as drawings of the buildings and some maps. Besides, there are some items with the names in Mayan and Castilian of the trees present in the area, such as guanacatle, ramón, jobo, and pixoy. 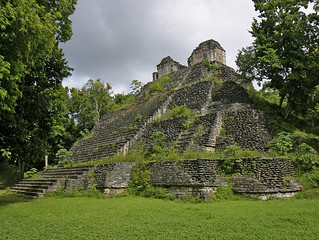 Apparently, this, more than an isolated Mayan city, was a sort of great "conurbation zone" since there are several groups of large contemporary constructions within a circle of fewer than 6 kilometers in diameter. The visitor will confirm this impression when arriving at the entrance booth to this area, discover that there are actually three different sites within reach.

The name Dzibanché is applied to the main group of ruins, which is one kilometer and a half east of the entrance house. Halfway down the road is the Lamay Group, another archeological zone that, although still under investigation, has not been opened to the public, although there is nothing to prevent it from admiring it from the road. It is a group of eight buildings distributed on two large plinths.

Like Kohunlich, Dzibanché saw his first days as a mere agricultural village about 200 BC. Some four or five centuries later, it began its great urban and social takeoff that would reach its apogee in the Mesoamerican Classic period. From the eleventh century, this city was abandoned. The buildings that can now be seen corresponding to the core of the ancient Mayan city, that is, the main residential and ceremonial centers, which were built on a small elevation of the land. This nucleus consists of several squares flanked by pyramids or by structures built on long stone platforms. Of the most important constructions in the area stands the so-called Temple I, a large building with rounded corners in the style of the Mayan pyramids of Petén, Guatemala, and Belize. Nearby stands Temple II, another high pyramid that contains several, where the remains of a great character of the Late Classic period, a possible "king" of the city called by the researchers the "Lord of Dzibanché" were found.

In the square presided over by the Temple II, there are half a dozen large structures, including the XIII Building, which has engravings with taps referring to combats and images of captives. Nearby there rises Temple VI, a pyramid with the Teotihuacan architectural style that combines a slope and a board. In its precincts, superior enclosures were found wooden lintels with calendar inscriptions, by which this site received its current Mayan name that means "writing on wood". Something further, there is also a Ball Game. It is, therefore, a huge and fascinating city that can not be omitted in a tour of the area.

Two kilometers after this town you can turn right and after 5 kilometers you will reach the visitor registration booth. This booth is unique for Dzibanché and for Kinichná, both areas have visiting hours from 8:00 a.m. to 5:00 p.m.

The name Kohunlich derives from the name Cohoonridge that Belizean workers gave to the logging camp, which was in the area in the 20s and 30s of the 20th century. It derives from the English terms Cohoon (corozo, a type of palm tree common in this area) and ridge (lomerío).

It is a fascinating archaeological zone both for its history and for its aesthetic value and the natural beauty that surrounds it. It is estimated that it was born as a hamlet around 200 BC. At the turn of the century gained power and grew in dimensions. Between the years 500 and 600 AD; the Temple of the Masks was built, which today is the most famous structure in Kohunlich and perhaps the most emblematic in the state of Quintana Roo.

Its pyramidal basement originally boasted on the sides of its main staircase eight large masks, of which only five survive to this day. It is believed that such masks of almost two meters in height represent the solar god Kinich Ahau. Part of the stucco and the red pigment that covered them is preserved. This temple is undoubtedly one of the most outstanding works of Mayan art. Towards the Classic period of Mesoamerica, that is, between 600 and 900 AD, most of the structures that can now be seen in the area were erected, such as the ceremonial buildings that make up the Plaza de las Estelas, as well as the Conjunto Pixa'an and Los 27 Escalones, two complexes that according to some interpretations served as residential areas for local leaders.

The city continued to grow during the Postclassic period but by 1200 AD. There was a collapse that was not well explained, and Kohunlich was practically uninhabited. Although it was known for its existence for many years, it was not until 1992 that the excavations and rescue works began, which allowed it to open to the public in 1994. Kohunlich is today the most beautiful and best-studied archaeological site in southern Quintana Roo. Apart it functions as an important refuge for wildlife. The sidewalks of the place were framed by a huge variety of plants and trees, are simply charming. And a large number of birds, mammals, and reptiles live among the old Mayan constructions. To get to the place, you have to leave Chetumal and take the federal highway 186. At 57 kilometers from the capital of the state, turn to the south (left) and take the 8-kilometer branch to the archaeological zone, which is open every day. 8:00 a.m. to 5:00 p.m.

Tulum seaweed update: sargassum is expected to arrive at the coasts of Tulum